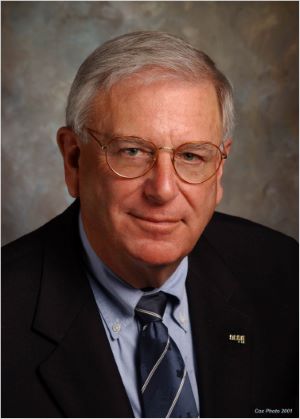 It is with sincere sadness that ASRM has learned of the passing of Dr. Charles Hammond on February 1, 2021. A Past President of ASRM (1985) and giant in the field of reproductive medicine, Dr. Hammond leaves a legacy.

Dr. Hammond was Professor and Chair Emeritus at Duke University School of Medicine and Chair of the Department of Obstetrics and Gynecology at Duke for 22 years. In addition to obstetrics and gynecology, he also specialized in reproductive endocrinology and infertility.

Dr. Hammond began his medical career upon graduation from The Citadel with a Bachelor of Science degree in 1958, continuing to Duke University where he received his medical degree and then joining the university as a resident in obstetrics and gynecology. In 1964, he completed a fellowship in reproductive endocrinology.

In 1969, Dr. Hammond accepted a position as assistant professor in Duke’s Department of Obstetrics and Gynecology, beginning a long and illustrious career in academia. He successively served as associate professor, professor, and in 2010 he was recognized as an E.C. Hamblen Professor Emeritus following nearly 30 years of service. Dr. Hammond served as Chair of the Department of Obstetrics and Gynecology from 1980 to 2002. From 1964 to 1966, he served at the National Institutes of Health as a fellow in the National Cancer Institute and the Institute of Child Health.

Dr. Hammond was a pioneer in the treatment of gestational trophoblastic disease and a founder of the Southeast Regional Trophoblastic Disease Center. He was a nationally regarded expert in menopause and hormone replacement therapy.

A well-respected leader in women's health, Dr. Hammond received many honors throughout his career, including being named a National Association for Women's Health Lifetime Achievement Award recipient, a member of the Institute of Medicine, a fellow of the Royal College of Obstetricians and Gynaecologists, an honorary member of the Canadian Society of Obstetrics and Gynecology, and a member of the Institute of Medicine, now the Academy of Medicine. He was granted a Lifetime Achievement Award from the American College of Obstetrics and Gynecology in 2015. Dr. Hammond will be remembered for his esteemed reputation as a physician, scientist, educator, mentor, and advocate for women’s health.